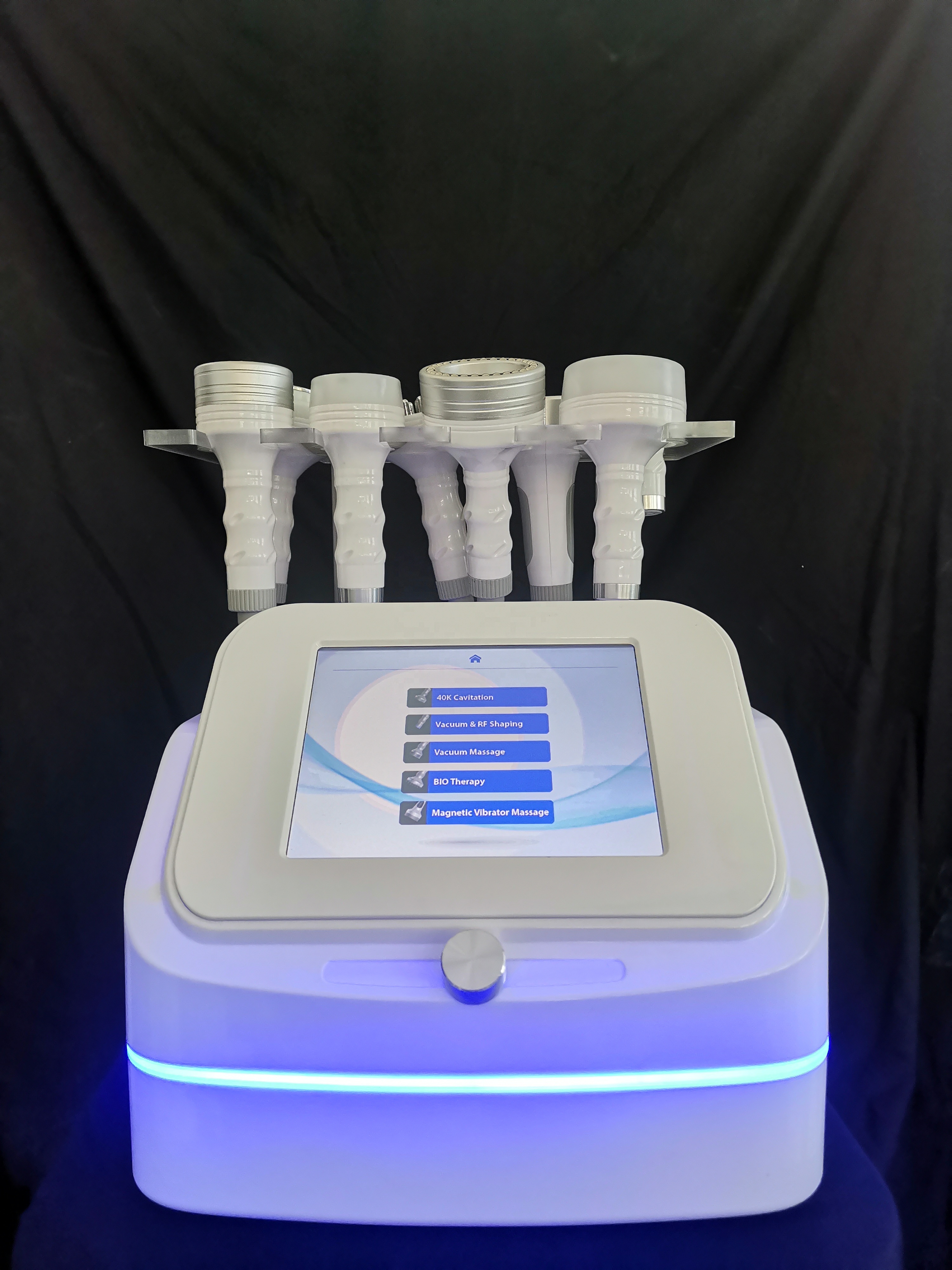 Working principle
Through the collective powerful sound head, it can emit powerful 40,000HZ sound waves, vibrate fat cells at the fastest speed, generate a large number of vacuum air bags inside and outside the fat cells, strongly impact fat cells, produce an inward explosion, and decompose triglycerides into glycerol. , released. fatty acid. The integrated glycerol and free fatty acids are then vented through the hepatic and intestinal circulation using RF waves at a frequency of 1 M HZ. Finally, vacuum RF and energy electrodes are used to position and tighten the fat. In physics, it is called "cavitation." The inward explosion of intracellular and extracellular cells may lead to increased molecular motion and increased energy levels, which ultimately leads to the breakdown of fat cells, thereby achieving fitness and weight loss. 3. Human body vacuum RF probe Used for body and facial remodeling. Weight loss Vaccum + RF fat blaster can promote tissue metabolism, repel cellulite, and make fat particles produce fusion energy at different depths and shocks. The deepest receptor can get particles on 3CM thick skin and rapidly expand and rapidly heat the cell wall. Exceeding the elastic limit and breaking the cells, the fatty acid is burned simultaneously from the pot, not only burning the fatty acid but also directly venting, thereby rapidly reducing the size of the particles 4. Eliminate facial wrinkles, tighten and lift The facial RF head capacitively coupled electrode is used to transmit radio wave energy and generate an electric field to enter the subcutaneous tissue through the surface of the skin. At a high frequency of 450 kHz, the polarity of the electric field changes 450,000 times per second. In response to rapid changes in the electrodes, the direction of the electrical particles of the skin also changes. At this time, the natural resistance in the subcutaneous tissue moves and generates thermal energy. Since the capillary dermal collagen may contract immediately when the temperature is in the range of 60 to 70 degrees Celsius, the customer may immediately feel the skin firming effect after the wrinkle treatment because it is lifted and fixed. When collagen is continuously produced, the thickness and density of the skin papillary dermis can be increased to remove wrinkles, eliminate scars, restore skin elasticity and luster, and make it golden yellow and smooth. When collagen is increased, fresh skin is produced at the surgical site, and wrinkles are removed by a large number of cells. In addition, when the skin is not elastic or has a thick stratum corneum in the wrinkle area, the surrounding skin is also renewed.
Application
Tightening arms, legs, thighs, buttocks, waist, back, abdominal muscles, reshaping body image Improve and treat orange peels of adipose tissue of varying severity It has the functions of soothing, decompressing and relieving pain (such as joint pain, sciatica), promoting regular mechanical aerobic exercise of skin tissue, quickly relieving stress and eliminating fatigue. Firms skin, tightens skin and shapes facial skin Circulates and activates cells to promote metabolism, thereby obtaining more than 100% collagen and elastin to improve facial and body skin